Tell me your Christian name ... 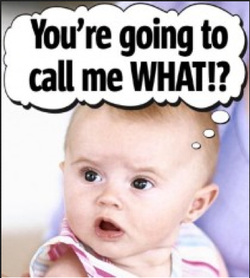 and I will tell you its meaning and equivalent in several languages, as well as day of celebration.
ASHER (m), “happy” or “fortunate” (Hebrew). Asher in the Old Testament was a son of Jacob and Leah, and the ancestor of one of the twelve tribes of Israel.

Saint Bernard of Menthon built hospices in the Swiss Alps in the 10th century [May 28]. Saint Bernard of Clairvaux was a theologian and Doctor of the Church in the 12th century; his feast is celebrated on [Aug. 20].

Saint Clare, a spiritual daughter of Saint Francis of Assisi, left her wealthy family to found the order of nuns known as the Poor Clares. When the infidels were attempting to besiege her convent, she placed a monstrance containing the sacred Host on the threshold, whereupon the attackers threw down their weapons and fled.

Saint Edward the Confessor was the king of England shortly before the Norman Conquest. Because of his popularity this name remained in use
after the conquest (most other Old English names were replaced by Norman ones), and was even the name of eight subsequent kings of
England. Edward is also one of the few Old English names to be used throughout Europe.

FRANCIS (m), “a young Frenchman” from the Latin name Franciscus.

Saint Francis of Assisi, the founder of the Franciscan order of monks, was the son of a wealthy merchant who renounced father’s wealth and
devoted his life to the poor. Later in his life Francis received the stigmata [Oct. 4].

Another saint of this name was Saint Francis Xavier, a missionary to eastern Asia [Dec. 3].

The chosen name of the Pope is Francis.

GEMMY could be derived from Gemma. It means "precious stone" or "gem"

Jeremiah was one of the major prophets of the Old Testament, and author of the Book of Jeremiah and of the Book of Lamentations. He lived to see the Babylonian destruction of Jerusalem in the 6th century BC.

Celebrations: Jeremias, the prophet, [May 1]. There is another St. Jeremias of Cordova (Spain) who died martyr in 851, (June 7).

JERUSHA. JERUSHA (f), “possession” (Hebrew). The name of a woman in the Old Testament.
Celebration: St. Possessor of Verdun, bishop, [May 11]

JOSEPH. JOSEPH (m), “God added (a son)” (Hebrew). This was the name of the eleventh son of Jacob. Out of envy, because he was the favorite of his father, his older brothers sold him to merchants going to Egypt and told their father that he had died. In Egypt, Joseph became an
advisor to the Pharaoh, and was eventually reconciled with his brothers. This is also the name of St. Joseph the husband of Mary.

Name of the apostle Saint Philip. This was also the name of an early figure in the Christian Church mentioned in Acts [May 3]. The name was borne by five kings of Spain, six kings of France, and five kings of Macedonia, including Philip II the father of Alexander the Great.

THERESE. TERESA (f), “she who reaps”, related to the name of the Roman goddess of harvest, Ceres (Lat.), Spanish and Italian form of Theresa.

Saint Teresa was a 16th-century Spanish nun who reformed the Carmelite monasteries. A Doctor of the Church, she wrote notable spiritual
books, [Oct. 15].

TRINITY. TRINIDAD, (Sp.) (f), “trinity”. The name evokes the mystery of the Blessed Trinity, Three Persons the Father, the Son, and the
Holy Spirit, in one divine nature.  [Celebration: Sunday after Pentecost].